We learned that adding some Fluotrol to each paint color made it easier to blend.  We also learned that it’s extremely important to mix more paint than you think you need, as we almost ran out of our top color (since it had to go all the way around the room, including above the berths.)  We managed to eke out enough by draining the last few drops of Fluotrol and even using a bit of glaze.

Here’s how the room turned out, seen at the end of the day with the sun behind a cloud.  I’m really thrilled with it.  You can still see where we blended the different colors, but it’s nothing that’s going to bother me when I look at it.

The girls’ side of the room.

The doorway side of the room.  Much of the left part of the wall will be covered by a large hunt cabinet (if we can get it up the stairs!) 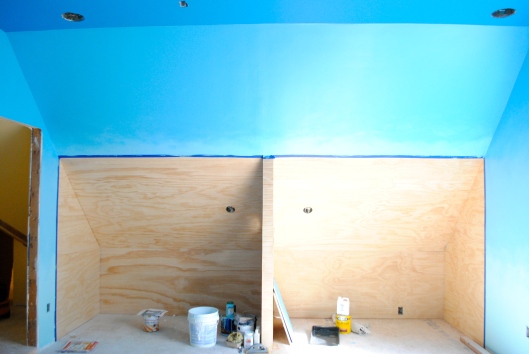 The boys’ side of the room.

Jon Cordes, the most patient painter I know!  Watch out for him to hang his shingle as a faux painter, because this stuff is addicting! 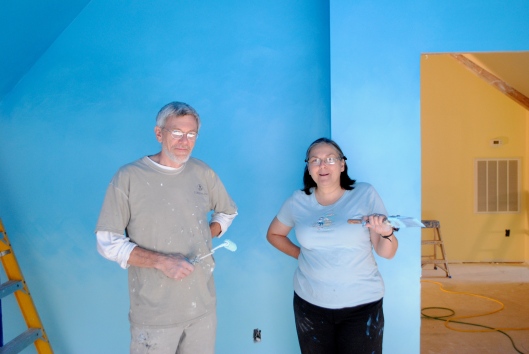 Jon and me, glad we’re done and happy with it.  Before we started, we prayed that God would bless our efforts to mirror the beauty of His creation, and we marveled at the ease with which He created the sky compared to how hard we had to work at it!  It just makes us give God all the glory for His beautiful creation!

While we were painting sky, Ben was involved in a more earthly task. 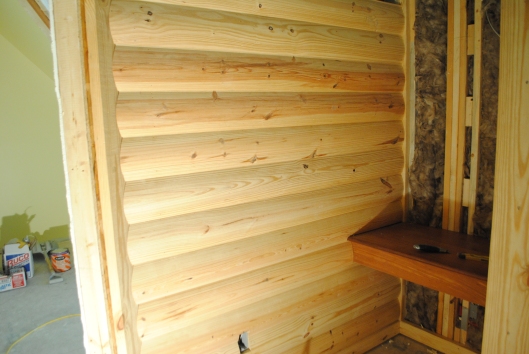 He continued building up the log walls of The Lodge and installed the Brazilian cherry vanity top.  I thought up the idea and bought the Brazilian cherry stair steps; Ben did everything else!  He took them home last night and glued and clamped them together, and he found a strip of cherry in the shop to use as a drop in the front.

I couldn’t begin to count the number of trips Ben has made up and down the stairs today, measuring, cutting, trimming and then nailing the logs in place.  He had to cut out for plumbing and electrical outlets, and it’s beautifully done.

He still managed a smile at the end of the day.  This may have been more earthly work than sky painting, but I think it looks pretty heavenly!  I predict we’re going to have a hard time prying people out of this bathroom!  Simply brushing one’s teeth or taking a shower will feel like a woodland getaway!

I called this post “Imaging the Creator” because we humans (as opposed to Narnians or animals) have the urge to create beautiful things because we ourselves are created in God’s image, and He is the Supreme Creator.

A blog about creating Narnia in our attic

Lately in the Wardrobe

What’s Stored in the Wardrobe

Hunt Through the Wardrobe

What Happens in the Wardrobe

Through the Wardrobe to Other Blogs

Through The Wardrobe has been nominated for The Versatile Blogger Award

The Chef and the Waitress
Victorian Mini